"He put a knife, threatened to kidnap his pregnant wife and daughter" - Russian Criminal

At the same time, Caesar’s best friend, lawyer Oleg Pirogov (Tsirkach), was extradited from Poland to Moscow. According to the telegram channel VChK-OGPU, in 2014 the two of them got into an extremely interesting story. Then the “colleagues” in the criminal shop suspected the “thief in law” Vadim Ivanenko (Vadik Krasnodarsky) of missing a large sum from the common fund. The circus performer volunteered to punish the thief. Vadik himself did not suspect this, so in February 2015 he agreed to take part in a feast organized by a number of Slavic "thieves in law" in Turkey. During the feast, one of the "authorities", who arrived with Tsirkach, took out a pistol and opened fire on Vadik. The police officers who arrived at the scene detained the surviving participants of the feast, including Tsirkach.

Then he was released on recognizance not to leave. He summoned his best friend Caesar to Turkey and the lawyers decided to flee through Iraq. They found a dubious Kurdish guide who led them along the path that "fresh" fighters entered ISIS. Together with 12 illegal immigrants, Tsirkach and Caesar secretly crossed the Turkish-Iraqi border, from where they were to be transported by bus to a relatively safe place. However, the entire group was detained by the Iraqi special services, which announced that they had arrested a "replenishment" for ISIS. 12 detainees confessed that they had arrived in the country to join a terrorist group. And only Tsirkach and Caesar "resisted" to the last. As a result, they were in prison for a long time, and they demanded confessions from them. And only after the embassy intervened were they released.


Tsirkach’s career in the criminal world went up sharply after he organized the murder of thief in law Vadim Ivanenko (Vadik Krasnodarsky) in Turkey. Officially, Vadik was accused by other thieves in law of stealing money from the common fund. However, on the eve of his death, he had a conflict for the right of leadership in the underworld of the Kuban with Shalva Ozmanov and David Ozmanov (Dato Krasnodarsky) — relatives of thief in law No. 1 Zakhar Kalashov (Shakro-molodoy). Returning to Russia from Turkey, Tsirkach and Ozmanov occupied prominent places in the immediate circle of Shakro. When Kalashov was arrested, the sphere of influence of Tsirkach narrowed to Noginsky and a yard of neighboring districts of the Moscow region. And then he was forced to leave Russia.


At the disposal of Rucriminal.info there is a certificate on the case against Tsirkach, from which the chronology of events becomes clear. On July 26, 2019, the investigator for especially important cases of the third investigation department of the first directorate for the investigation of especially important cases of the Main Investigative Directorate of the Investigative Committee of Russia in the Moscow Region initiated a criminal case on the grounds of a crime under Article 210.1 of the Criminal Code of the Russian Federation, against Pirogov O.I.


July 27, 2019 regarding Pirogov. a resolution was issued to prosecute as a defendant in the commission of a crime under Article 210.1 of the Criminal Code of the Russian Federation.


Later, article 163 of the Criminal Code of the Russian Federation (extortion) was added to this charge.


According to the information of the RNTSB Interpol, on 03/04/2019, Pirogov left the territory of the Russian Federation.


On November 12, 2019, the Babushkinsky court granted the petition for the arrest of Pirogov in absentia. He was put on the international wanted list.


And here are excerpts from the case under Article 163 of the Criminal Code (extortion) about how Pirogov’s gang acted. Having lost Kalashov’s sponsorship, Tsirkach returned part of the Moscow region to the brutal 90s with racketeering on the streets in broad daylight.


According to the investigation, the structure of the organized criminal group looked as follows. The "overseer" from Pirogov and Barkalov was Mikhail Pavlyuchenko (Masyanya). He designated the amount of tribute, acted as an arbitrator, etc. And the hardened criminal Shiko Shamoev was directly in charge of the militants. In his subordination were, in particular, Murad Magomedzagirov, Makhach Salamov, Ruslan Abukerimov, Anatoly Svergunov, Artur Nazarenko. They began to visit the merchants and announce that now they must pay tribute to the "roof" every month. What happened to those who disagree is clearly seen in the example of Galstyan. He refused to pay and ended up "on the counter". When, according to the gangsters, a large sum came, the merchant was demanded to rewrite the house and the land plot to the bandits. Once again refused, he was forced into a car, handcuffed and taken to a private house in the Noginsk district. There the businessman was put in an iron cage and beaten every day. As a result, he was forced to give the attackers money and property worth 1.7 million rubles.

Manakhov had a business partner with whom they constantly financed each other. When there was a conflict between them, each side with that the opponent owes money. In particular, Manakhov issued an invoice for the businesswoman for 7 million rubles. She complained to Cirkach, whom she knew. After that, gangsters on the road blocked the car with Manakhov. They put a knife to his throat, put him on the passenger seat and handcuffed him to the handle of the car. The businessman was taken to a secluded place, where he was demanded to abandon financial claims against his former partner, and was also forced to write an IOU for 7 million rubles. Then they persistently demanded this money from Manakhov.


Rucriminal.info cites an excerpt from the cases against the organized criminal group of Tsirkach:


“In order to implement the specified criminal intent, in the specified period of time Gushchina A.E. turned to her earlier acquaintance Abukerimov R.M., who was a local resident, known in the territory of the Noginsk urban district of the Moscow region as a person enjoying authority in criminal circles, having close ties with Pirogov O.I., who is a person occupying the highest position in the criminal hierarchy "thief in law", told the latter about the existing debt to Manakhov A.Yu., which she did not want to return, and asked Abukerimov R.M. put pressure on A.Yu. Manakhov, including by making threats and using violence against the latter, with the aim of coercing A.Yu. Manakhov. abandon their property claims to Gushchina A.E., to which Abukerimov R.M. agreed, thereby they entered into a criminal conspiracy to commit extortion.


In the first decade of February 2019 Manakhov A.Yu. again arrived at the place of residence of Gushchina A.Ye., to the apartment at the address: ... however, no one opened the door to his apartment and Manakhov A.Yu. went to his home. At the same time Abukerimov R.M., acting in accordance with the previously achieved with A.E. Gushchina. agreement, the state registration number was not established in the course of the investigation on the Nissan Teana car in his use, he began to pursue A.Yu. Manakhov, who was driving A.Yu. Manakhov. car "Nissan Zhuk"…. Manakhov A.Yu. noticing the pursuit, stopped next to the bus stop "Zagornovo" of Elektrostalskoe highway, Noginsk, Moscow region, Abukherimon RM drove up after, got out of the car and acting in pursuance of the previously reached with A.E. Gushchina. agreement to exert pressure on A.Yu. Malakhov, with the aim of forcing the latter to refuse the demand with A.E. Gushchina. debt repayment, going up to A.Yu. Manakhov. began to force him to stop demanding from A.E. Gushchina. return the sum of money n in the amount of 7050,000 rubles, while he expressed a threat of subsequent murder, if he did not stop demanding from A.E. Gushchina. debt repayment.


Manikhov L.Yu. realizing that A.E. Gushchina decided to implement the previously expressed threats, realizing that Abukerimov R.M. has close ties with Pirogov O.I, who is a person occupying the highest position in the criminal hierarchy — "thief in law", taking into account the current situation, expressed by R.M. Abukerimov. he perceived the threats for himself realistically. After that, on 20.02.2019, at about 20 hours 50 minutes A.T. Manakhov, who considered that after the lapse of time A.E. will not implement his threats against him, again arrived at the place of residence of the latter, ... to talk to Gushchina AE. about the return of the debt, to which the latter, seeing Manakhov A.O. told the latter that she would now turn to M.M. Pavlyuchenko, who has an unofficial status in the criminal environment on the territory of the Horinsky district of the Moscow region, the "overseer", enjoys authority in the criminal environment, has close ties with O.I. Pirogov, who is a person holding higher position in the criminal hierarchy — a “thief in law” can threaten him with kidnapping and influence Abukerimov R.M., as a person in the hierarchy below M.M. Pavlyuchenko, and who is ready, at the direction of the latter, to commit criminal acts against Manakhov A.Yu. After that, Gushchina A.E. at 20 hours 59 minutes called Abukerimov R.M., told the latter that Manakhov A.Yu. had come to her again. ...


In order to coerce A.Yu. to waive the demand for the return of the debt from A.E. Gushchina. and the return of the last previously written by A.E. Gushchina. IOU, on the car of the victim of the brand "Nissan Zhuk", continuing to illegally, against the will of the victim to detain A.Yu. Manakhov. in this car, which was illegally seized by MA Magomedzagirov, A.Yu. Manakhov was transported. na site on the territory of CHT "Kalina" Bogorodsky urban district of Moscow region .... Magomedzagirov MA, continuing to implement them jointly with Gushchina A.The. criminal intent to extortion, brought Manakhov A.IO. from the car to the street, and with the singing of forcing the victim to refuse the demand with A.E. Gushchina. repayment of the debt in the amount of 7,050,000 rubles, each struck with a force of at least 10 blows with his hands on the torso and head of the victim, from which the latter experienced physical pain, they threw A.Yu. Manakhov. into the pit on this site, while Abukerimoi R.M. continued to threaten Manakhov A.IO. with a knife-like object threatening the victim with murder. After that, Abukorimov R.M. removing the aforementioned object, similar to a knife and the quality of the weapon used, inflicted on A.Yu. Manakhov. at least 20 blows to the head, torso and limbs, and M.A. Magomedzagirov illuminated the victim’s mobile phone with a flashlight, giving the opportunity to R.M. Abukerimov. aiming strikes.


When using violence and expressing threats of murder, that is, the use of violence dangerous to life and health Abukerimov R.M. and Magomedzagirov M.A. demanded from the victim to inform them the location of the debt receipt Gushchinoj A.The. on obtaining a loan from A.Yu. Manakhov. sum of 7,050,000 rubles, demanded to transfer the specified receipt to them and stop demanding from A.E. repayment of the specified debt. As a result, committed against Manakhov A.Yu. of the above crimes, the latter, fearing for his life and health, said that the receipt was with his friend in an inaccessible place and promised Abukerimov R.M. and Margomedzagironu M.A. stop demanding from A.E. Gushchina. repayment of the above debt. Magomedzagirov M.A. and Abukernmov R.M. despite the factual failure to receive from A.Yu. Manakhov. promissory note Gushinoj A.O., believing that as a result of committing against Manakhov A.Yew. the above crimes, their joint with A.E. the criminal goal was achieved and Manakhov A.Yu. refuses to further demand the repayment of the debt from A.I. Gushchipoy, transported the victim back to the town of Elektrostal, Moscow region, while on the way Magomedzagirov M.A. continued to express to A.Yu. Manakhov. threats to kidnap and murder the latter, his pregnant wife and minor daughter ... 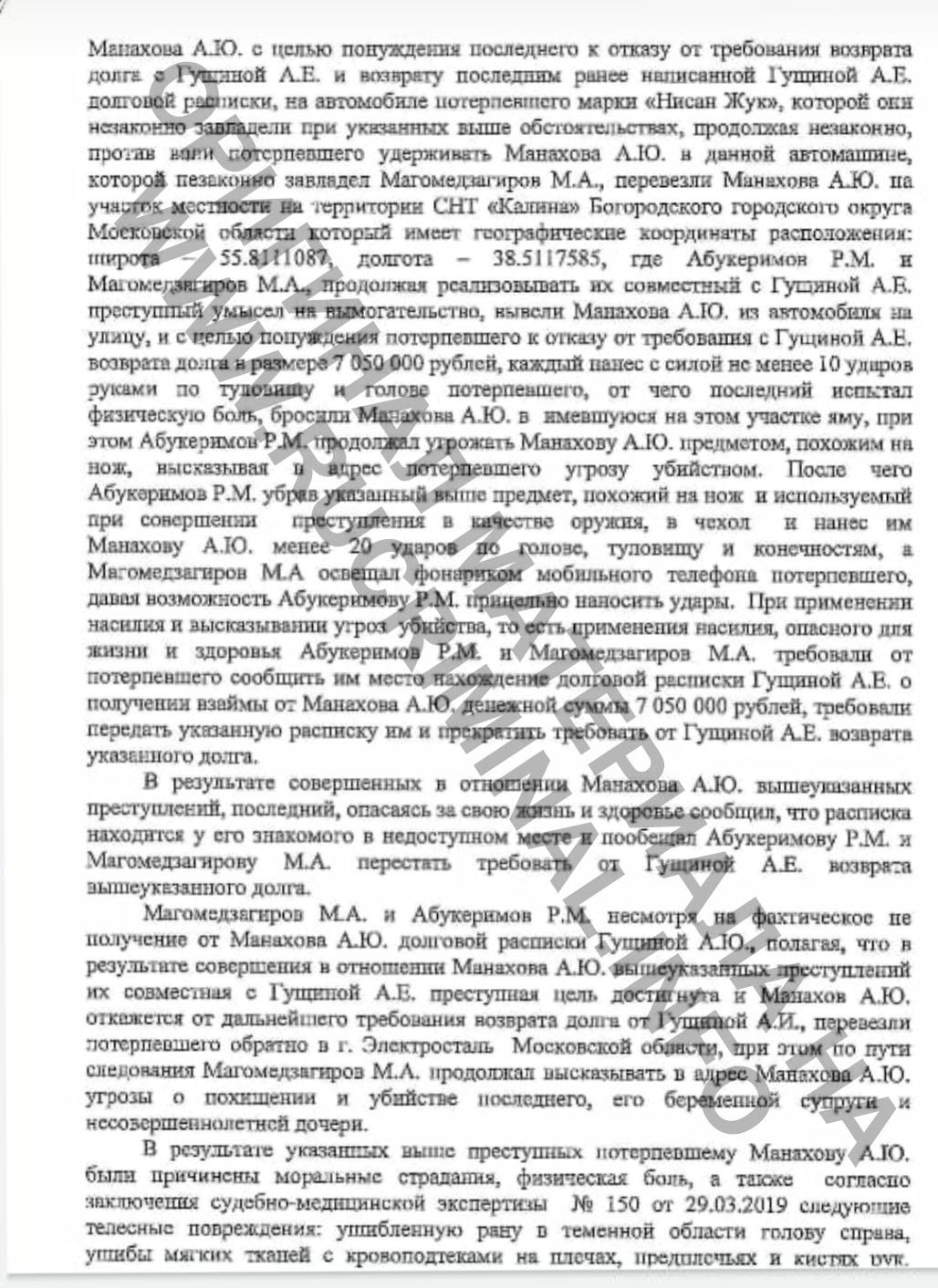